THEY FINALLY BROKE ME (almost)

(NOTE: I originally wrote this about a month ago, and there's a happier, less bitter update at the end of this.)

My favorite show on TV is It's Always Sunny In Philadelphia. One of my favorite episodes is "The Gang Broke Dee," in which, after years of constant put-downs and denigration, Dee finally just gives up and sinks into despair. The episode begins with a black screen, and the sound of Dee sort of moaning and chewing. Then we see her shoveling "trash cake" into her mouth, her hair dirty and messed up, food all over her face. She just doesn't give a shit anymore. Doesn't have the energy to defend herself. The rest of the gang is staring at her in perplexity and disgust, even though THEY are responsible for her sorry state. 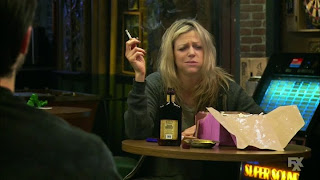 Well, that's how I feel about my job as a library tech right now.
When I first interviewed for my current position, the Principal at the time specifically wanted someone to come in and revamp and revitalize their sorry little library. It was the smallest in the entire school district. It was originally a shop room they stuck some low shelves in. She wanted a dynamo to bring it alive and make the students want to use it. I worked my ASS off for 8 years doing exactly that, and I feel like I have done a really good job.
One of my first challenges here was getting the English department's old textbooks and English novels OUT of the library's storage room, so we'd have room for actual LIBRARY STUFF here in these cramped quarters. There was no real work-space, so I re-configured things, even made trips to other schools who were surplusing furniture, and picked up a large work desk, and some other pieces to give the library what it needed as far as workable space and storage. And the Principal at the time was very supportive, and appreciative of my efforts.

When I started here there were about 5,000 books in the library, which is WAAAY below the district average.
To put some perspective on it, the recommended state standards are 20-25 books per student, and we only had 4 books per student.
Now there are over 10,000 books in the collection, which means I have helped to DOUBLE this library's collection of books. Almost all of that has been done through labor-intensive donation drives, fund-raisers, and writing funding requests to parent organizations. We are still far below the state recommendations, but we were moving in the right direction.
And students really use this little library! When I started there were about 8 "regulars," and aside from that it was a ghost town.
Now it is routinely PACKED with students, especially in the mornings when over 80 students are crowded into this small facility that only has seating for 44. Circulation has more than tripled.
But over the last few years I've been getting less and less support for the library's needs. The district eliminated all but ONE of our credentialed Librarians, which puts a lot more pressure and responsibility on the library techs, like me. But I've worked hard to convince my fellow techs that we need to step up our game and be willing to take on extra tasks, and do some of the "credentialed Librarian" duties, for the sake of the students. Because if we DON'T get proactive, the district might eliminate US, too. A lot of ignorant people seem to think anybody can run a library, that it's just checking books out and sticking books back on shelves.

In the vacuum left by the eliminated Librarians, some of the library techs (especially the newer ones) were really struggling,
so I've been working with another experienced (and awesome) library tech to create a new "professional development community" for library technicians. The two of us are coaches for this program, and we've organized two very successful professional development days for our fellow techs so far. We're all working hard as a group to learn more and share ideas, and make our libraries dynamic and exciting and user-friendly for the students.
I just want us all to band together and make everyone else in the school district aware of what an important and enriching resource the school library can be.
But like I said, the past few years have been rough. The library gets forgotten a lot, and given a patronizing pat on the head and a distracted, "That's nice, dear."
I've been lobbying for more space, and a better facility for years. Recently, they said they were going to have a bunch of new shelving built in the library's storage room, and the library work room. I was a little confused at first, telling them that we don't need extra shelving in those back rooms, the set-up back there right now is good for library storage and library work space. I said I was concerned that adding extra shelving back there would actually decrease my already small amount of work space. The Principal (new one, not the same one who hired me to revamp and revitalize the library) kept saying, "Trust me, you'll love it! It'll be great! We're gonna get you all set up."

At one point I said,
"Hey, you're not gonna take that space away from ME, and give it to somebody ELSE, are you? Because the library is short enough on room as it is!"
"What?! Huh? Not that I know of!"
And being naturally trusting and STUPID, I believed him. And I was given one day to "temporarily" move all of my library stuff out of the areas they were putting the new shelving in. But they kept assuring me the new shelving would be GREAT.
So I currently have extra carts, boxes, and stacks of stuff all around the circ desk, and even blocking a door and a walkway. "Temporarily." Except today I overheard the guy in charge of the shelving construction say something that indicated it was for TEXTBOOK storage, and that this had been the plan all along.
I confronted the Principal again, and he stammered a little, but finally admitted that yes, they "may" have to use all that new shelving for textbook storage for other departments.
Now I realize how stupid I was, that it was ALWAYS the plan to dump a bunch of textbooks back in here. In the little bit of space I had for library storage and library work space. They just didn't want to have to tell me, because they knew I would not be happy about it. I just wish they'd been honest about it from the beginning.

So... now I don't know what to do with all this stuff I suddenly have no space for. My bulletin board and display supplies, my book processing materials and equipment. I literally have no idea what to do with all of it. Dump it in the trash?
To add insult to injury, they are also considering giving my office to a "Community Liaison" or the "RTI Specialist." But when they first brought that up, they were referring to it as, "That room." I was like, "Um... 'that ROOM' is MY OFFICE."
Our current Principal is someone I get along with personally, but unfortunately he is not a reader, not a book guy, does not see the importance of a library.

"Everything's online now, the newest technologically advanced schools don't even HAVE libraries,"
is something he is rumored to have said to several people. I don't find it hard to believe, because I've heard him say things like this in the past, and I think we've all known people like this.
In my experience, it seems like there is a lot of weird & short-sighted ignorance in the generation somewhere between mine and my parents'. People who are so gobsmacked by technology that they think any new digital format will REPLACE standard time-proven formats, rather than exist happily alongside it.
The kids and teens I work with definitely want access to both print AND digital format books. And when I ask them, their preference is always overwhelmingly for the actual printed page.
The library of the future will still look like a library, it will just have extra tech included in it. And human beings will always need and want the physical communal space in a library (public and school) to explore ideas, work together, escape the world, concentrate, etc.
I work with teenagers every day, and they're just as likely to play old-fashioned card games with a real deck of cards as they are to playing games with their digital devices. They shift effortlessly between the ancient and the cutting edge. It's no big deal to them.
I can see that the Principal feels a little bad about pushing the library into an ever smaller and smaller corner, but that doesn't make it any better. He does not deny it when I suggest that he may ultimately be trying to eliminate the library altogether. It is nowhere on his list of priorities. Library services are taking a giant step backward here. After everything I worked so hard on for the past 8 years.
So...
I give up. Tired of all the advocating, preaching, educating, and overachieving.
I get it. Libraries are boring and dumb. People who work in libraries just sit around reading magazines all day, and anybody, even a volunteer or student or nimble monkey can check books out.
Besides, everything is online now.

Books are dead. Libraries are a thing of the past.
(I must just be imagining all the kids that swarm in here every day, using every inch of this facility for a million different things, asking for reading suggestions, printing homework, doing research, learning, etc.)

I'm just gonna go bury my face in a delicious box of trash cake and moan for a while. 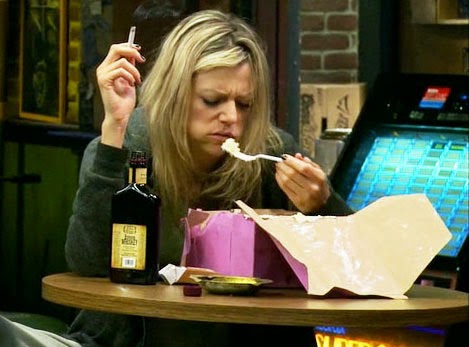 UPDATE: It's a week later than when I first started this post, and I have since accepted a lateral move to a high school that is three times the size of this school, and has a giant old library with really neat 1930s art deco styling. I hope whoever follows me here in this tiny little make-shift library brings a love of reading and literary culture and a lot of energy to fight the good fight. These kids deserve so much more. Now that I'm further away from it, I don't take it personally, and I know everybody has different priorities and different focus, but it is a real shame.
Posted by Tommy Kovac at 6:42 PM 2 comments: