Finally one of our students brought up the "Steampunk" genre in our last library book club meeting. She was way excited about it, eyes wide and mind on fire. I thought, NOW is the time to put together a bibliography on Steampunk books for our students!
A few years ago at a writer's conference I attended a presentation by David Gale, Editorial Director for Simon & Schuster Books for Young Readers. He told us that "Steampunk" was going to be the next big thing in children's publishing, and blow up all over the place.


Here is the list we came up with, using only books currently in our library collection. Some of these have all the elements of Steampunk, some of them may only have a few. If a particular title seems not Steampunky enough for you, just consider it "recommended if you like..."


Airborn by Kenneth Oppel
Amulet by Kazu Kibuishi (graphic novel)
The Clockwork Three by Matthew Kirby
The Death Collector by Justin Richards
Doctor Illuminatus by Martin Booth
The Eyre Affair by Jasper Fforde
Fever Crumb by Philip Reeve
Flora Segunda by Ysabeau S. Wilce
The Golden Compass by Philip Pullman
Gotham By Gaslight (“Batman” graphic novel)
The Haunting of Alaizabel Cray by C. Wooding
His Majesty’s Dragon by Naomi Novik
“Hollow Fields” manga series by M. Rosca
Howl’s Moving Castle by Diana Wynne Jones
The Hunchback Assignments by Arthur Slade
“The Hungry City Chronicles” by Philip Reeve
Incarceron by Catherine Fisher
“The Infernal Devices” series by Cassandra Clare
The Invention of Hugo Cabret by Brian Selznick
“Keys To the Kingdom” series by Garth Nix
Larklight by Philip Reeve
Leviathan by Scott Westerfeld
The Lies of Locke Lamora by Scott Lynch
The List of 7 by Mark Frost
“The Looking-Glass Wars” by Frank Beddor
“Monster Blood Tattoo” series by D.M. Cornish
Nick of Time by Ted Bell
Pastworld by Ian Beck
Perdido Street Station by China Mieville
Ship Breaker by Paolo Bacigalupi
The Stress of Her Regard by Tim Powers
Tanglewreck by Jeanette Winterson
The Time Machine by H.G. Wells
Twenty Thousand Leagues Under the Sea by Jules Verne
Whitechapel Gods by S.M. Peters
Worldshaker by Richard Harland
If you're not sure what Steampunk is, think Victorian Science Fiction, with fantastical machinery using steam power. Gritty London streets, either in the actual Victorian era, or influenced heavily by it. Top hats, goggles, cogwheels and clockworks... Jules Verne and H. G. Wells are considered the grandfathers of Steampunk. You tend to find mechanically-inclined strong female characters in Steampunk.
Here are some other core Steampunk titles, which may or may not be appropriate for junior high and/or high school libraries:


The Anubis Gates by Tim Powers
Boneshaker by Cherie Priest
The Difference Engine by William Gibson & Bruce Sterling
Infernal Devices by K.W. Jeter
The League of Extraordinary Gentlemen by Alan Moore
The Return of the Dapper Men by Jim McCann, Paul Morrissey, & Janet Lee
Steampunk by Ann & Jeff Vandermeer
The Steampunk Trilogy by Paul D. Filippo﻿
The Windup Girl by Paolo Bacigalupi
Incidentally, I remember first hearing about Steampunk way back in about 1993 when I was working at the Santa Ana Public Library in the children's and young adult section. ﻿Just sayin'. The genre ain't NEW, but apparently there's a resurgence. Which is cool for those of us who work with teens.
Posted by Tommy Kovac at 10:45 AM 2 comments: 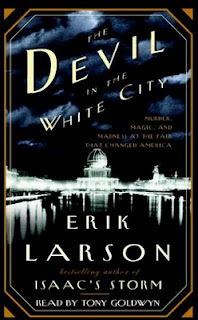 I've been reading The Devil in the White City, Erik Larson's engrossing nonfiction book about the 1893 Chicago World's Fair, and the murders that took place in conjunction with it. This morning I came across this line:

Visitors also encountered the latest and arguably most important organizational invention of the century, the vertical file, created by Melvil Dewey, inventor of the Dewey Decimal System.

When I read that I actually GASPED ALOUD, and immediately turned the corner of the page down, so I wouldn't forget where to find it. I am such a nerd.
Posted by Tommy Kovac at 9:38 AM No comments: