THE FUTURE OF LIBRARIES

I received a Facebook message from a former student asking me for help on a presentation for one of her college classes. The subject was "School Question." The message read:


Hey Tommy! I have to do a short presentation on the future of public libraries for one of my classes on Wednesday. I wanted to just ask you what you thought about the current library situation (for example: cutting back on days, not providing as many books, etc) and what direction they will be going. Also, your views on the same situation but for school libraries.

I wrote her back right away, typing furiously because of course it's something I really care about. I told her I think it's a shame that libraries are so under-valued. It doesn't matter how many books we check out, how busy we are, what an awesome program we have going, none of that seems to translate into funding. I know things are pretty much the same for public libraries, too.
Julie and I were just talking about how neither of us (she's a public library Director) have an actual book budget, and have to depend on donations and grants, and any other "special funding" we can drum up to buy new books. Every year we have to get craftier and craftier. It's not like there aren't many new books being published! The Young Adult market is exploding all over the place. How are we supposed to keep up?
We almost had some Librarian positions cut this year, but an old dude retired, so the district just left that position open, and didn't lay anybody off. But that means the Librarian I work with will now have THREE schools to bounce back-and-forth between, instead of just two. I'm by myself two to three days a week as it is.
Oh, and even though they keep cutting library staffing and funding, they still expect the same level of service, and the same quality and quantity of materials. It's very frustrating.
I know we're a vital part of the school. There are even times every week when we have to put out the "library full" sign. The most we can handle at one time is 40 students. (We have the smallest library in the whole school district)
Tomorrow is Back To School night, and I've been asked to keep the library open for it. I guess I'll put a big box on the counter that says, "HELP! Please donate!" and beg for money all night. Maybe I should wear rags, and smear some coal on my face.
As far as what direction I think libraries are GOING...
I fear it will be more of the same over the next couple of years, if not worse.
Maybe the problem is that we library workers are too solitary and too meek. Especially solitary in the public school system, since we're literally by ourselves most of the time, and others have little or no idea how much we actually do. And many library workers tend to be quiet and uncomplaining. Do we need to complain more? Do we need to continually march up to the office and loudly gripe about how many kids were in the library that morning, and how the phone kept ringing, and all our "other related duties" (lost-and-found, lockers, computers, copier, etc)?  Sometimes I get a little sick of hearing the 3 main office ladies bitch about how so-and-so doesn't want to help out on the phones, or so-and-so isn't good about taking her break on time, or whatever.  There's THREE of them up there, and ONE of me in here.
It's like how the Republicans usually get their way because lots of them are louder and meaner than most Democrats.
I have allowed myself to go on a bit of a tirade here, I guess.  I did not write all this in response to that former student's question, I swear!
Posted by Tommy Kovac at 4:22 PM 1 comment:

When I started working here I thought it was weird that we had this big Whiteboard right behind the circulation desk.  Then eventually we found cool ways to use it.
The "Coming Soon" wall is very popular with our students.  We highlight the series they're most frantic for.  They check the Coming Soon wall all the time, and let me tell you, we'd better have these books the DAY they're released.
The most annoying part of maintaining it is figuring out the series #.  For some reason a LOT of teen and YA series don't want to make it CLEAR what # each book is.  I'm assuming it's a marketing tactic, so readers don't get put off by a book clearly marked "#9" or whatever, if they haven't read the 8 ones previous.  Anyway, sometimes I have to check Amazon and even the author's website before I find the #.
Our students very specifically want to read series in order, starting from #1.  When I was a kid, I didn't mind reading #3, then backing up and reading the first two.  I thought it was kind of cool, almost like turning them into prequels.
Posted by Tommy Kovac at 2:38 PM 1 comment:

THOSE GIGGLES WOULD DRIVE HIM CRAZY

Because of our lack of any book budget I try to get my coworkers to donate their books to our library.  A teacher friend of mine just brought in two giant bags full of science fiction, all hardback.  Some of it was totally awesome vintage stuff, which I immediately covered with those nice mylar book jackets.
My favorite is Science Fiction of the 30's, compiled by Damon Knight, copyright 1975 Bobbs-Merrill. 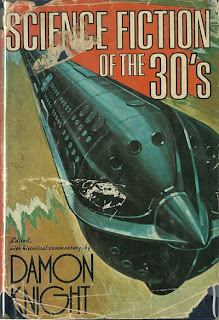 It collects stories and illustrations originally published in the 1930's.  A lot of the illos are lame and/or too dark, but I found one that's a keeper.  It's from a story called "The Mad Moon," by Stanley G. Weinbaum.  Here 'tis:
I'm keeping that one for myself.  It's too fragile and cool.
Posted by Tommy Kovac at 9:06 AM No comments:

I'm so excited.  While processing new* books so they're ready on Monday for the first day of school, I discovered that in Alexandria's "Items" window, if you click on the Categories tab you can put a bibliography heading/title in the "Bibliography" field.  This changes EVERYTHING, man.
I love creating and maintaining bibliographies, and I make bookmarks with them, small enough to print 3 per sheet on regular-size paper.  But that means I can only fit so many titles per list.  I have a few "expanded" lists (sci-fi, and horror), which I do a tri-fold thing for.  But that takes up a whole sheet per list.
I really like doing unusual subject lists, like, "Recommended if you like Tim Burton," or "Read the Movie," or "Frequently Challenged and/or Banned Books," but those subjects aren't going to already be in the MARC records.
This is why the "Bibliography" field I discovered is exciting.  For example, I was processing a copy of David Brin's The Postman, so I put "Read the Movie" in the Bibliography field.  That's a new list I'm working on, and I can tag as many books as I WANT with that heading!  And at any time I can call up a complete bibliography just by typing "Read the Movie" in a keyword search.
Trust me, this is RAD.

*Most of them aren't really new, they're donated.  Because we have exactly $0 for a book budget.  But at least they're new to us.  And I clean them and put protective film over the covers.
Posted by Tommy Kovac at 2:28 PM No comments: