HELP ME, TYLER DURDEN-- YOU'RE MY ONLY HOPE

-or-
THE POWER OF FICTION

There's an 11th grade girl who frequents the library. She's very quiet, but interesting and quirky. She's a huge fan of Chuck Palahniuk, particularly FIGHT CLUB. She's so ensorcelled by that novel, she has three copies of it; two in English, one in Korean. We'll refer to her as "Fight Girl" from this point onward.
Fight Girl says she doesn't like "YA fiction," because she can't identify with the protagonists, usually. For some reason, she TOTALLY identifies with Palahniuk's narrative voice, and that connection is clearly very important to her. This makes me like Fight Girl. It's unexpected and atypical.
When I asked her what it was about the narrator in FIGHT CLUB, she said something to the effect of, "Well, he's a white collar/cubicle worker, and he's frustrated, and pretty much hates everything."
She also likes the gay subtext, and the fact that Palahniuk himself is gay. The concept of "the outsider" seems to resonate with her. Which is cool.
Fight Girl is like a prickly 17 year-old porcupine, sitting there in the library with a book obscuring her face, framed by her long black hair. I think she's read almost every Palahniuk book, now. She also likes Kurt Vonnegut (CAT'S CRADLE), and James Baldwin (NATIVE SON, GO TELL IT ON THE MOUNTAIN, etc).
Her mother read FIGHT CLUB, and even watched the movie with her, but still has a hard time understanding the significance. Her mother told her father, "You better read this book if you want to understand your daughter." Apparently Dad only got a few pages in, threw the book down, and said, "Why do you like this?"
She's also worried about her grades, even though they're good. I think she's under a lot of pressure to constantly excel, and she's undoubtedly getting pressure about college and career choices. I told her there's so much more to life than high school. She said, "I know. I keep trying to remind myself of that. Even though people like my mom try to convince me that everything about high school is SO IMPORTANT, and will affect your whole life." (I'm paraphrasing, but that was the gist)
Fight Girl says she's having a crappy year in general, and it seems to me that having found Palahniuk, she's clinging to his work like a life raft. Which is exactly how I felt about Anne Rice's books when I discovered them at age 17. Louis, the narrator of INTERVIEW WITH THE VAMPIRE, was absolutely real to me, even though I knew he was fictional. His voice spoke to me in a way that no one else's did, when I needed it most.
That's why books are important. Especially fiction.
Fight Girl told me that she was called up to the Counseling Office, because one of her teachers said it seemed like something was wrong. This was very irritating to Fight Girl, and she wanted to know which teacher said that. The counselors did not divulge this info, or Fight Girl might have gone all Tyler Durden on his/her ass. I get the impression she did NOT open up to the counselor about anything.
I have my eye on Fight Girl, and I want her to know that I'm a sympathetic ear if she needs it. When I look at her it's like seeing a reflection of my own high school psyche. I'd be even more concerned if she didn't have Palahniuk, Vonnegut, and other nihilists on her side. Friendly voices saying, "Yeah, man, fuck ALL of this."
If you've never carried a book around with you like a secret talisman, and re-read it over and over again, then you might not understand.
Have you ever carried a book around with you everywhere like a secret talisman, and read it over and over again? Have you ever felt like a fictional character understood you better than anyone in real life?

Yesterday I came up with some reading suggestions, one of them being GEEK LOVE by Katherine Dunn. I told Fight Girl I'd read that it's one of Palahniuk's own favorite novels. I got it off the shelf and handed it to her. She smiled and thanked me.
A few minutes later she rejected it. I noticed her silently returning the book to its place on the shelf. She left without a glance or a word.
I'd expect no less from a complicated, atypical deep thinker. It's not that easy.

Posted by Tommy Kovac at 3:13 PM No comments:

We're having a Scholastic Book Fair the last week of March, so this month's bulletin board decor is a nauseating mix of carnival-y book fair imagery, Women's History (see previous post), and Easter & spring bunnies, etc. 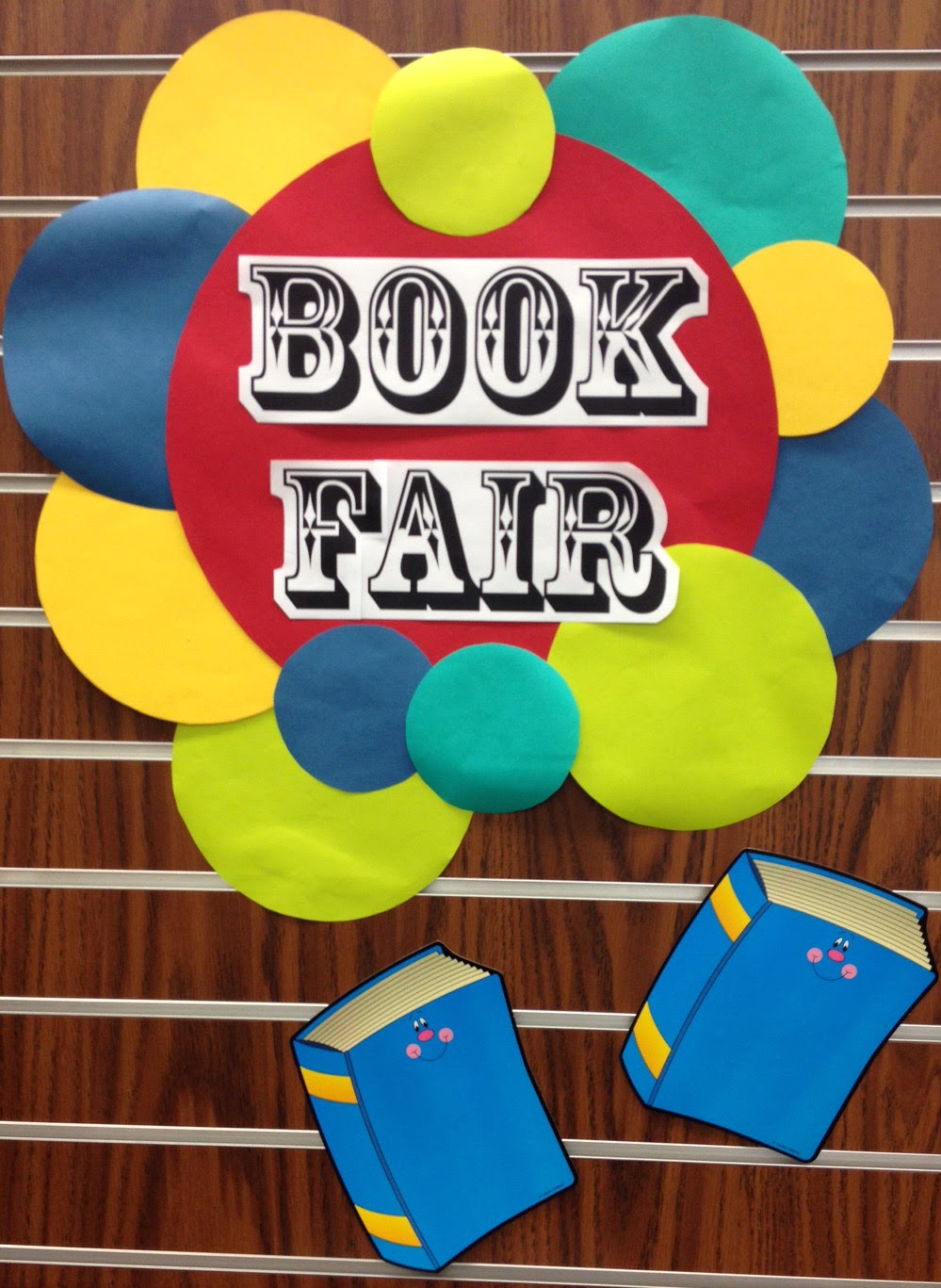 I did a Google image search for "carnival," and "fair," and found some nice & simple ideas. Primary colors, that circus-type font in Word, etc. We printed big fair ticket images on colored paper and cut them out, printed lettering on yellow paper, etc. SIMPLE. Because this is a busy month and shit's gotta get DONE. 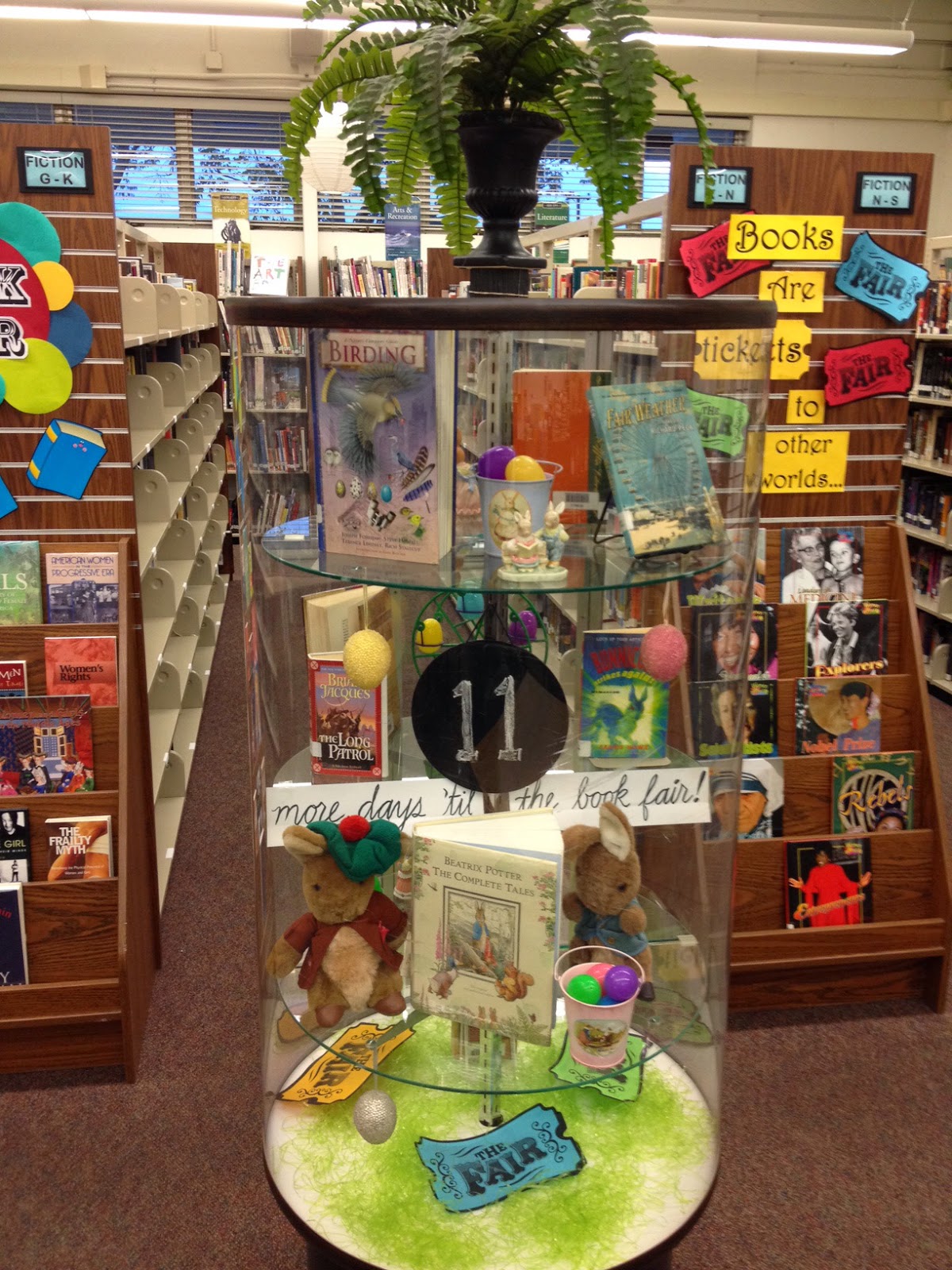 And here's the circular glass display cabinet that some of my fellow library techs are jealous of. It is pretty cool. I don't know where it came from.


We got a cheap little round blackboard for less than $2 at Michael's for the countdown.


Per reader request, here is the carnival ticket image, which I think I found online searching for free carnival/fair clip art: 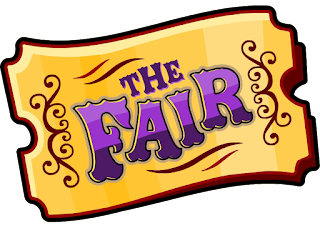 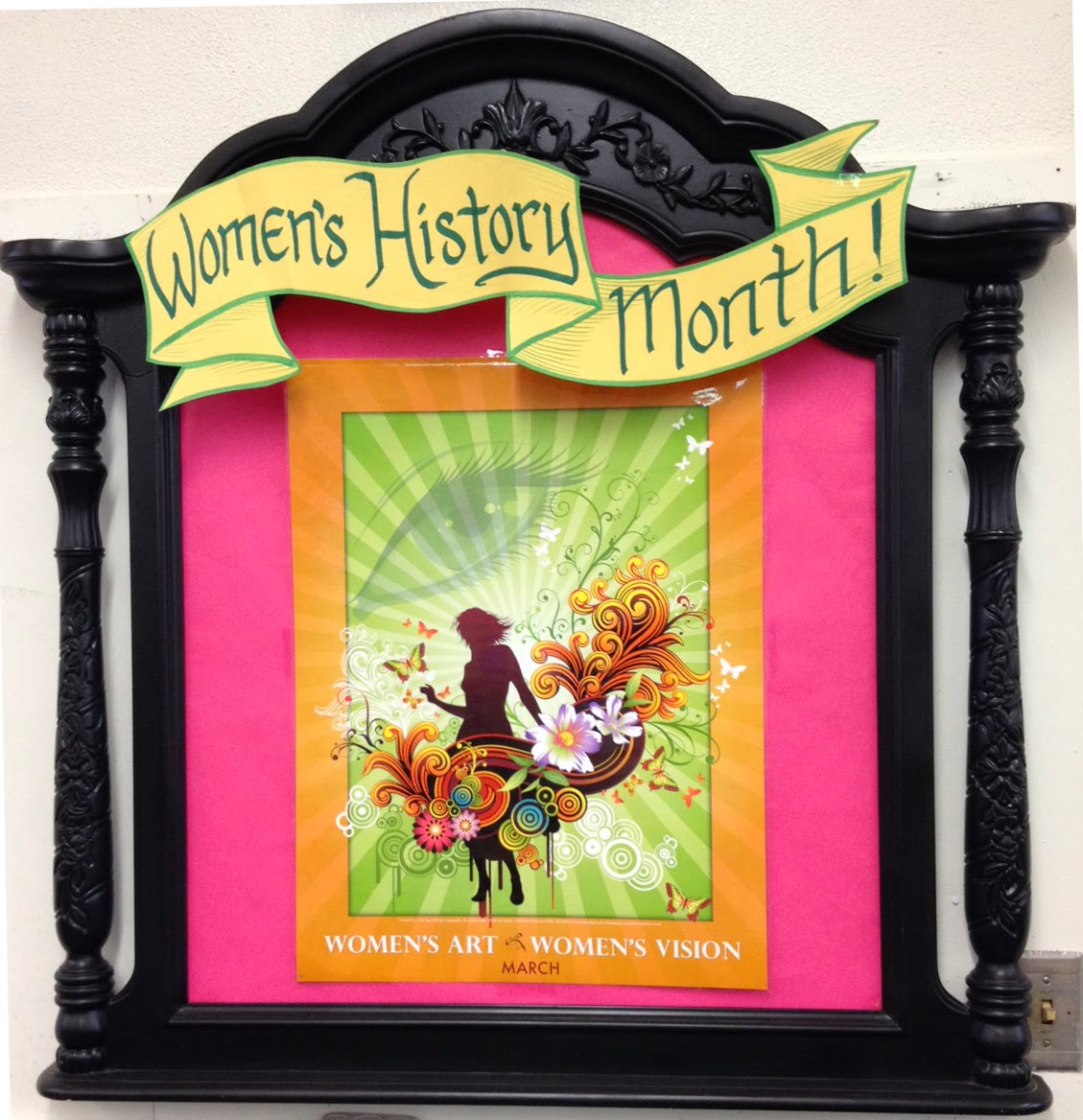 Did you know March is Women's History Month? Well, it is. So give it up for the lay-deees!
I'd had a hard time finding a visually pleasing poster for it, so I was happy to obtain the one above from the "Diversity Store," HERE. 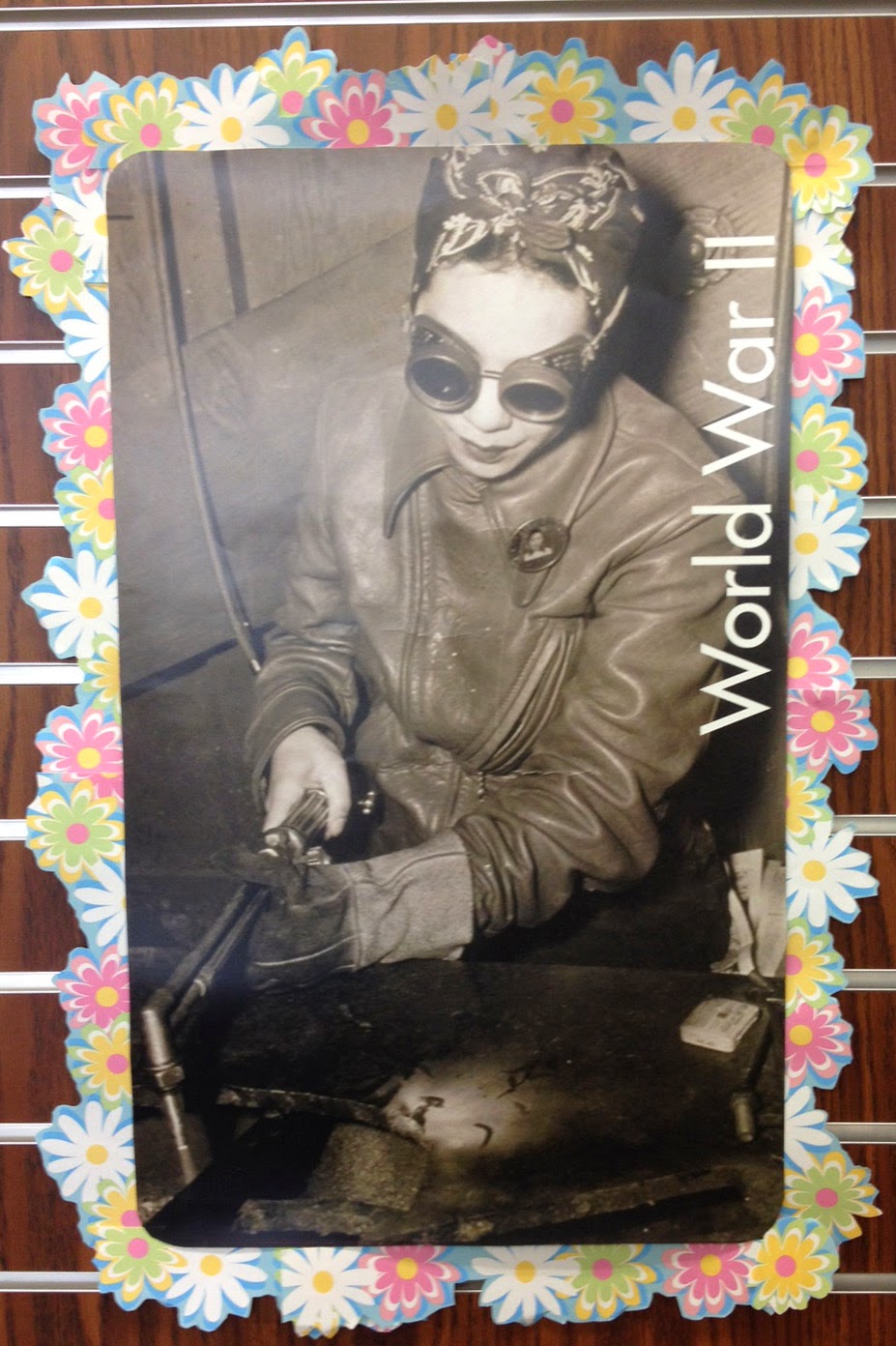 The World War II woman above is from a free set of historical encyclopedia posters I picked up at some library conference. I cut the commercial stuff off and then my library volunteer aunt created that lovely lady-border around it using flowery stationery. Clever, yes? 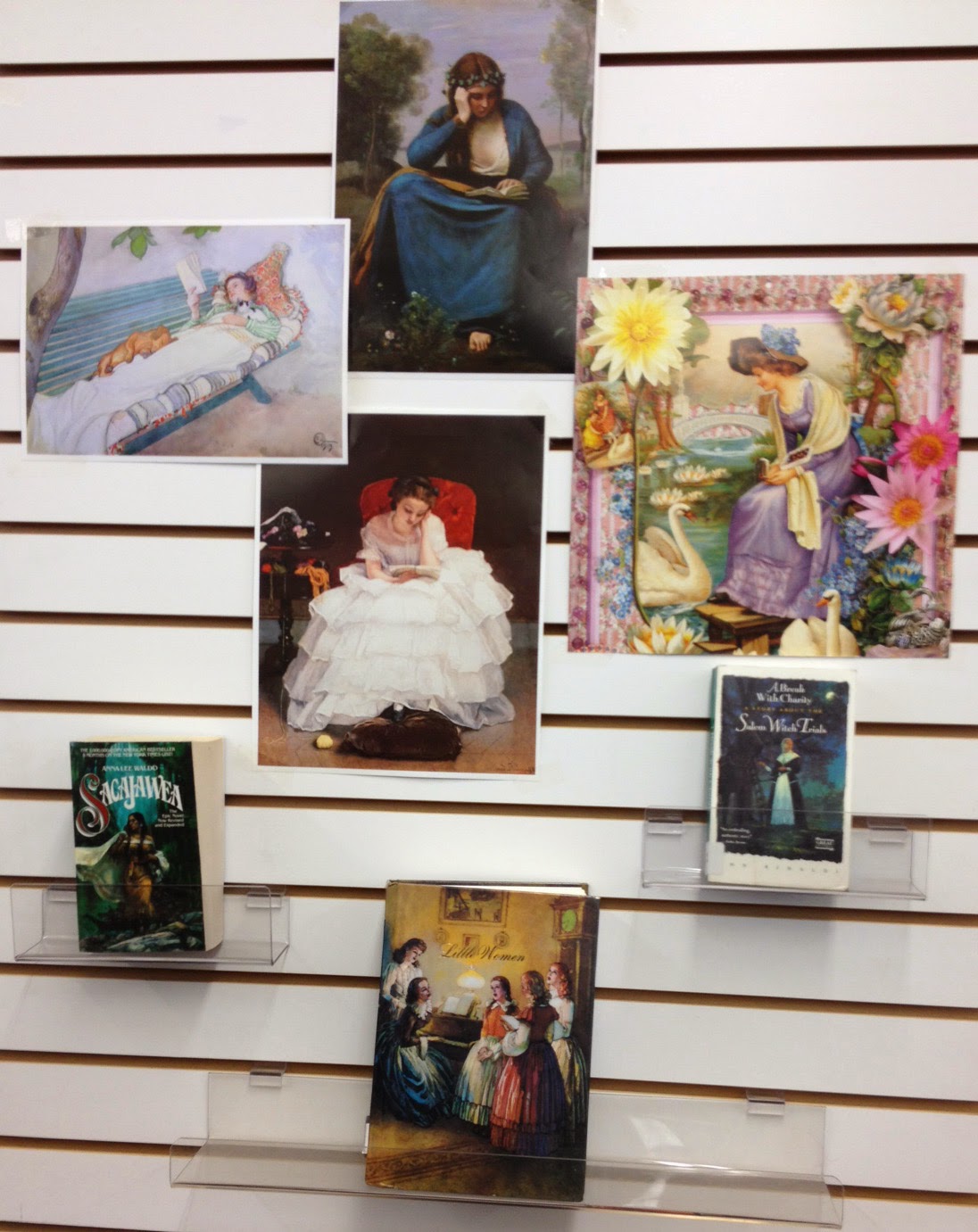 We used the nicest pictures from an old calendar of "Women Reading." "The Reading Woman?" Something like that. Then we added appropriate books to the display. Alcott's Little Women, A Break With Charity (Salem Witch Trials) by Ann Rinaldi, Sacajawea by Anna Lee Waldo, and Beyond the Burning Time by Kathryn Lasky.
Women's History ain't always pretty, you guys. Shit happens.


And here's the image I use for a bibliographic bookmark I call "Sugar & Spikes," which features edgier books for edgy girls.

Here's the list of books, all of which are available in our school library:

33 Things Every Girl Should Know About Women’s History… edited by Tonya Bolden
Girls: a History of Growing Up Female In America by Penny Colman
Gutsy Girls: Young Women Who Dare by Tina Schwager
Patently Female: Stories of Women Inventors and Their Breakthrough Ideas by Vare and Ptacek
Picture the Girl: Young Women Speak Their Minds by Audrey Shehyn

(added after original post:)
There's also this, which we put on the smaller bulletin board behind the counter-- 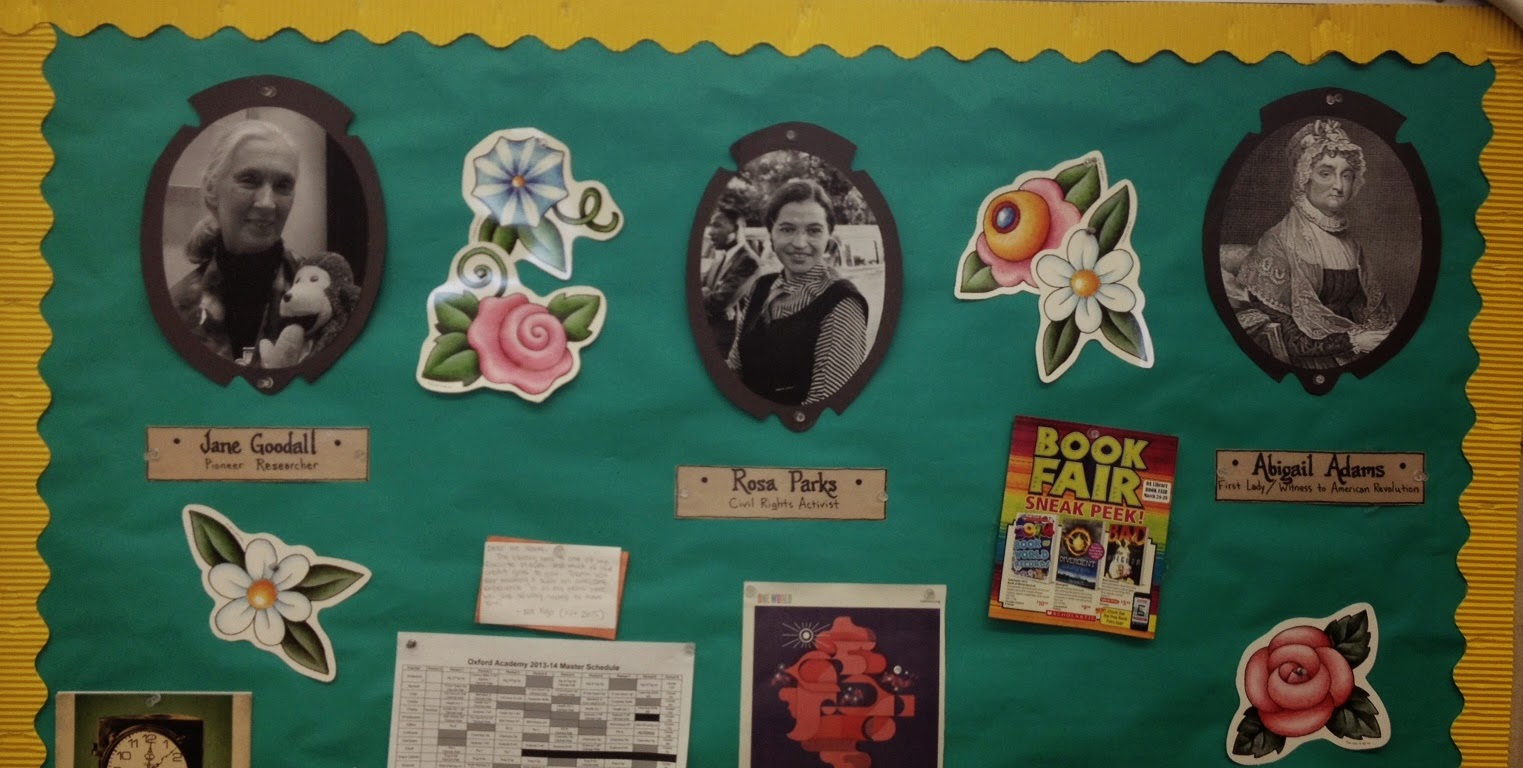 Years ago the Librarian and I made these "framed" pics of famous women, just by printing nice pictures out in black & white, and putting a backing frame of black construction paper, then creating labels that say who the women are, and what they're famous for. So we have Jane Goodall, Rosa Parks, and Abigail Adams. It's probably time I added some more ladies to this little gallery.
Posted by Tommy Kovac at 9:39 AM No comments: