One of the first things I do every morning when I first come in and open the library is patrol the very back shelves, looking for out-of-place books the students might have stashed back there at the end of the previous day. They're always easy to spot.
Then I go through the rest of the room and grab any books left lying on tables, or otherwise out of place. I then scan them in "statistics mode," so our circ system will know that they've been used, even if not officially checked out. I also do this after any period of heavy library traffic, once things calm down. This is important to show the REAL usage some of your library's books are getting, since when it's time to evaluate books with weeding (discarding) in mind, one of the factors you look at is how many times they've been checked out. If you did NOT scan the "off-tables," a book such as "The Period Book," about girls' reproductive systems, might appear to have never been used. But if you have done off-tables, then you might see that "The Period Book" had actually been used about 3,000 times in one year. But no one's been brave enough to actually check it out.
Anyway, a while ago we received a batch of free books from Disney Press, which included the super cheesy and disposable, "Wizards of Waverly Place: the movie: the junior novel." It's a horrid 123 pages of dreck and movie photos. 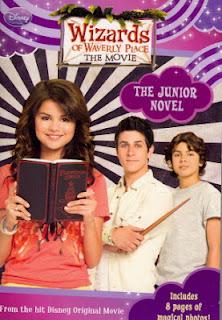 But I decided to go ahead and put it into our collection. Here's why:
Our school is a college-prep academy with an entrance exam and extremely high standards. BUT... our students are still kids. They may argue philosophy and do quantum mathematics in their sleep, but they also watch cartoons and play video games. I was dying to see if any of them would be bold enough to check out the stupid Wizards of Waverly Place book, in between the David Sedaris and Sartre.
No one has officially checked it out. But FINALLY, this morning after the before-school rush of kids, when I went around and collected off-tables, THERE IT WAS. The lame-ass Wizards of Waverly Place book. And it was lying on a table near the circ desk, and there had NOT been raucous laughter coming from that table. That table was quiet. Which means whoever had been looking at it or reading it had NOT done so in a mocking fashion.
I KNEW it. Everybody needs their deep dark guilty pleasures, even young geniuses.
This does not mean I would ever want to PAY for something so stupid, but if it's free and gives a hard-working kid a few moments of freedom from serious thought, then why not?
Posted by Tommy Kovac at 4:00 PM No comments: