After I tore down all the Christmas crap in the library, things were bare for a while before I could wrap my head around what to put up next. Then we received a copy of the ALA catalog and I saw the new "READ" poster featuring the cast of the Hunger Games movie, so I thought it would be a good time to revive the "Read the Movie" theme. We've ordered the Hunger Games poster, and I'll add it when it arrives. In the meantime I cut out the image of the poster from the catalog and taped it to the front of the circulation desk, and kids are totally noticing it and squealing and dragging their friends over to look at it. I feel like saying, "Okay, take it DOWN a notch so I don't end up HATING the Hunger Games!"
ALA ordering info for Hunger Games poster: http://www.alastore.ala.org/detail.aspx?ID=3650
For my b-board I used a construction paper marquee I made a few years ago, with the library symbol. The film reels are cut out of foam sheets, and spray-painted silver. I used black construction paper circles glued between to make it look like rolls of film. The filmstrip ribbon is something you can get at party supply stores that have "movie theme" stuff. I used more foam to create spacers between the halves of the film reels. It wasn't that hard, really.
I went through all of our posters and used the best from books that were made into films. I purposely did NOT use the Twilight poster because some girls saw it out and said they'd be very disappointed in me if I put that one up. I happily obliged them by exiling it. They reminded me that when it was up before, during the heyday of Twilight, I ended up sticking goggly eyes on Kristen Stewart. They liked that.
I also weeded out the Diary of a Wimpy Kid poster just because... well, it's lame. The books are lame, the movie looks lame, the poster is lame. The "READ" poster actually has an illustration of the Wimpy Kid on the TOILET. I am not putting that up.
Oh- and I cut out stars and printed this slogan across several of them: "...but don't judge the book by the film."
Posted by Tommy Kovac at 1:41 PM 1 comment: 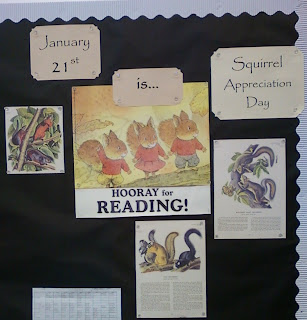 Did you know that January 21st is official "Squirrel Appreciation Day?" Well, it is. And you should do something about it. Last year my mom special-ordered a tie with a squirrel on it for me, to represent. I wore it proudly and received many nice compliments. This year, however, the calendar is cruel and has placed Squirrel Appreciation Day on a SATURDAY, when I will not be at work and not have a good reason to wear a tie.
One of the students I work with suggested I wear it on Monday instead, so I guess I'll do that. But it won't be the SAME.
I love seeing the perplexed yet delighted reactions of the students when they see the Squirrel Day board.
Posted by Tommy Kovac at 1:11 PM 1 comment:

Email ThisBlogThis!Share to TwitterShare to FacebookShare to Pinterest
Labels: Bulletin board, bulletin board display, holidays

After thoroughly saturating the adult horror market, zombies are now leaking into YA fiction. We just purchased Jonathan Maberry's Rot & Ruin and the sequel, Dust & Decay, so I thought it might be time to highlight zombies in the 'brary.
Here's the list of zombie fiction I pulled together today for our display:

The Boy Who Couldn't Die by William Sleator
Cell by Stephen King
The Death Collector by Justin Richards
The Drum, the Doll, and the Zombie by John Bellairs
The Enemy by Charles Higson
"Forest of Hands and Teeth" series by Carrie Ryan
"Generation Dead" series by Dan Waters
My Rotten Life by David Lubar
Pride and Prejudice and Zombies by Seth Grahame-Smith
Rot & Ruin by Jonathan Maberry ("Benny Imura" series)
Someone Comes To Town, Someone Leaves Town by Cory Doctorow
"Strange Angels" series by Lili St. Crow
Zombie Blondes by Brian James
Zombie World (graphic novel) by Mike Mignola (creator of "Hellboy")
Zombies Calling (graphic novel) by Faith Erin Hicks
ADDENDUM 1/20/2012
Two more titles to add, although we don't have them in our little library quite yet:
How To Be a Zombie by Serena Valentino
World War Z by Max Brooks
﻿Brad Pitt is starring in the movie version of World War Z. I think that's weird and sort of a surprising choice for him, but I read and liked the book.
Posted by Tommy Kovac at 2:32 PM 1 comment:

In my last post I cited Brian Sibley's blog post about Pauline Baynes as a source of info and images. I left a comment there, and he responded and said that in fact he had read my "Wonderland" graphic novel (illustrated by the talented Sonny Liew), and posted about it HERE. Isn't that cool? I had no idea, so that was a nice surprise.
What's really cool is that he explains in his post (which is about all sorts of things Alice-related) who Elsie, Lacie, and Tillie were. If you don't remember, in Carroll's original work the Dormouse talks about them. In our graphic novel, the three sisters actually make an eerie appearance.
Posted by Tommy Kovac at 7:16 PM 1 comment:

A former student donated a bag of books that were mostly Tolkien and Terry Pratchett. As I was processing The Tolkien Reader, I noticed some very nice illustrations throughout it, and thought I recognized Pauline Baynes' work. Sure enough, it was.
Baynes is best known as the original illustrator of the Narnia books by C.S. Lewis. If you've only seen the cheap paperbacks with only black & white illustrations, you should check out some of the nicer editions and see her full-color work as well. It's beautiful, detailed, and classic.

The idea of her illustrating anything other than Narnia was new to me, so I decided to do just a little research and find out more about this charming artist from the good old days of children's illustrated literature.
﻿           Pauline Baynes was born in Brighton in 1922, and died at the age of 86 in 2008, leaving some unfinished work on illustrations for Aesop's Fables. She was a busy creative lady up until the very end, and jolly good for her!

Tolkien and Lewis were contemporaries and friends, but it was actually Tolkien who worked with Baynes first. Tolkien was preparing Farmer Giles of Ham for publication, but was unhappy with the first illustrator. Tolkien actually dumped him in favor of Baynes' more authentically Medieval and humorous illustrative style.
C.S. Lewis saw Baynes' work for Tolkien, and enlisted her for his own Narnia books.
﻿
﻿

Baynes was a prolific artist, though, and worked on many different projects throughout her entire life, such as The Arabian Nights, a bunch of fairy tales and fables, and even some of her own original stories.
In 1968 she won the Kate Greenaway Medal for Uden's A Dictionary of Chivalry. I think maybe nobody (in the U.S.) gives a shit anymore about the Kate Greenaway Medal, which is too bad. It's still awarded every year for "outstanding book in terms of illustration for children and young people." I guess the Caldecott Medal overshadows it. Kate Greenaway and Randolph Caldecott were both classic Victorian-era children's illustrators.
I have to include one of Kate Greenaway's own illustrations, it's just so lovely and English and gay:
﻿﻿﻿

﻿
Back to Pauline Baynes: Later in life she illustrated a bunch of religious picture books. When I first read that, I was like, "Ugh..." but then I saw she had also done illustrations for the Koran, so apparently her religious views were fairly open and scholarly. In fact, I later found this cool quote from The Guardian, UK:
It was somewhat to her chagrin that she developed a reputation over the years as an illustrator of mostly Christian works and, to redress the balance, one of her last creations (her "children" as she called them) was a series of designs for selections from the Qur'an, scheduled for publication in 2009.
I couldn't find any record of that edition of the Qur'an actually getting published, so I'm not sure what happened with that. But I love that she was "chagrined" about her rep as a Christian illustrator, and felt it needed "redressing."
One of the best sites I found while looking into Baynes' life and work was Brian Sibley's blog, which includes something thrilling for a Lewis Carroll enthusiast like me. Pauline did a small line drawing for the "lost" chapter of Through the Looking-Glass and What Alice Found There. The chapter involves a wasp with a wig reading a newspaper, and Sir John Tenniel said he couldn't illustrate such a thing. The nerve! Sibley was a close personal friend of Baynes near the end of her life, so his blog post about her is really interesting. 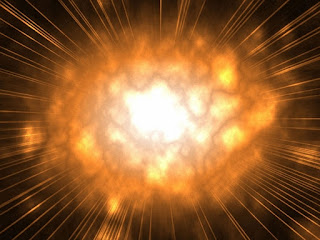 Posted by Tommy Kovac at 7:29 AM No comments: 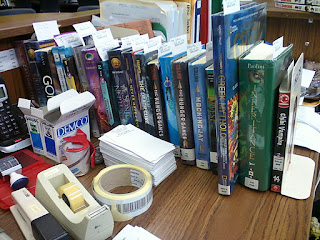 This is what our "hold" shelf looks like today.
Today is the first day back to school after our 2-week winter break, and it was SUPER busy this morning. Loads of books were returned, many of which had holds placed on them by other students. This means they go onto the "hold" shelf, and we send a notice to the students in their English classes. Our policy is to allow one week for the student to pick up their hold, otherwise it goes to the next student in line.
It's interesting to see what's popular right now, isn't it? I mean, I just got back from vacation so I'm trying really hard to give a shit about work. Anyway, let's take a look at the hold shelf.
Predictably, all 3 books in the "Hunger Games" series by Suzanne Collins are there. And the final book in the "Eragon" series by Christopher Paolini.
"39 Clues" by various authors, "Heroes of Olympus" by Riordan, "Kane Chronicles" by Riordan, "Gone" by Grant, and that stupid "Diary of a Wimpy Kid" by Kinney are all still highly sought-after series. But there's also a book on Greek Mythology by Donna Jo Napoli, which is nice to see.
I hate to admit it, but one of those "Left Behind" books is also in the hold queue. They've been around since the '90s, but I guess kids always like a freaky apocalypse scenario.
Only one manga title sits on the hold shelf at present. "Chibi Vampire." The kiddies love that. It looks intensely annoying to me, but whatever.
Oh- and there's also Legend by Marie Lu. Surprise! it's dystopian! I'm pretty sick of the whole dystopian trend. It's just not my scene, dig?

To sum up:
Believe it or not, WHILE I was typing this a student came up and asked to put a reserve on the Hunger Games. We only have 2 copies, and as you can see they are BOTH currently reserved.
Ugh. Tomorrow I definitely have to drag down all the Christmas decorations and stuff it all away until next school-year. That damn Christmas tree is staring me in the face like a dead cockroach nobody wants to clean up.
Posted by Tommy Kovac at 3:11 PM No comments: