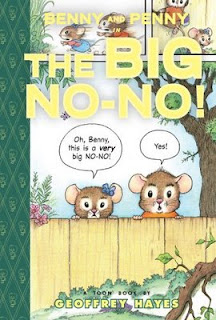 I don't think we need anything more than just the cover illustration of this book, and can just let our minds fill in the depraved horrors these two adorable mice are evidently witness to...
Posted by Tommy Kovac at 9:05 AM 1 comment:

So I had the library half-decorated for Halloween when I had to do jury duty. I hoped I would be excused after sitting around for a while, thus I left all my decorating stuff out in the library, thinking I'd be back the next day to finish it all up.
But no, I ended up being selected for a case that took 8 full days, and was emotionally draining for all of us.
So when I finally got back in the groove in the library, Thanksgiving was almost here, and I just quietly slipped all the Halloween stuff back into the storage room and slapped up one temporary November/Thanksgiving board, which you see below:
Eh. It's okay, but no great shakes. I already had all the elements in a November folder, having made the acorns and leaves a few years ago.
I did think it was a happy coincidence that the November page of the My Little Pony calendar coordinated perfectly with my fall colors. 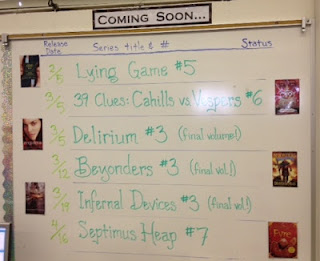 One of the students had asked me when I was going to update our "Coming Soon" board behind the circ desk, because we finally caught up with all the upcoming releases. So I cruised our library's wishlist on Amazon for popular series, and put this list together:

March 5th:
Requiem by Lauren Oliver
(Delirium #3, the final book of the trilogy)

A few little thoughts on this list: Cassandra Clare's series (plural) seem kind of cool, but the titles "Mortal Instruments," and "Infernal Devices" remind me too much of my beloved His Dark Materials series by Philip Pullman. I'm just referring to the titles, not the actual content. Haven't read Clare's work, yet.
Regarding the 39 Clues sub-series Cahills Vs. Vespers, I think the publishers of that series must want to annoy library catalogers. It's bad enough each one is written by a different author, and I resorted to making the call # "FIC 39."
And one more thing-- I think it's interesting that there always seems to be some apparent trend in the "Coming Soon" lists I put up. Obviously this one is March's trio of final books in trilogies. March being the third month. I GET it already. 3.