I think one of the best things about people who work in libraries (the ones who are truly library-minded) is that they understand the importance of preservation. Books can be time capsules and treasures if they end up in the right, appreciative hands.
Before I started working in a school library, I worked in a public library, in the children's room. I loved it, and I still have friends there. One of them occasionally rescues books that are about to be discarded or sold for pennies in one of those indiscriminate library sales. Which are exciting and fun, don't get me wrong! But some books rate better treatment.

My friend knows I'm a fan of the original Oz books, so she sent me these two time-worn little books. They're obviously not in good shape, one of them is missing the spine and back cover, and they both are marked "5" on the cover. At first I thought it meant $5, and then realized it probably meant 5 CENTS. Poor, sad little old books.
I'm sure to a collector these are practically worthless because of their condition, but I'd never seen them before, and love them.

The teen & YA publishing world loves "issues." Especially an "issue du jour." Like cutting, gender identity, obesity & anorexia, school shootings, etc. Kids are drawn to tragedy and sensationalism, and publishers capitalize on that.
I think there may be an emerging trend of teen books about NUT ALLERGIES. Deadly ones. Here's why:
I was just going through the December 2012 issue of VOYA, and discovered a review of Janet Gurtler's Who I Kissed. It's a drama about a girl who eats a peanut butter sandwich, kisses a boy, and then the boy DIES because unbeknownst to the girl, he had a severe peanut allergy. But don't laugh! The reviewer refers to the book as a "...timely heartbreaker, designed to raise awareness about nut allergies..."

From that same issue is Ayun Halliday and Paul Hoppe's Peanut, a graphic novel about a girl so desperate for popularity that she FAKES having a nut allergy, which results in an emergency medical scare involving paramedics, etc. So she's outed for NOT having nut allergies. To keep anyone from thinking the book is insensitive to those who DO have violent nut allergies, the book includes "information on what teens really go through having a life threatening food allergy." (Halliday has street cred, having created the well-known East Village Inky Zine, and writing for Bust magazine)

I know that any kind of severe allergy is nothing to sneeze at, and I myself had to use a prescription inhaler for several years, still have to frequently pop Claritin-D, but come on. Peanuts are funny. Peanuts KILLING people is hard not to laugh at, isn't it? I am sorry. I would definitely read Halliday and Hoppe's Peanut before I'd try wading through Gurtler's Who I Kissed. But I'm sure many drama-seeking girls will love it.
Maybe "peanut allergies" will be the next "paranormal romance!" All the teens will be clamoring for it.
I'm trying to be sensitive, but we had a student with peanut allergies a few years ago, and at a school function he stupidly ate something that had actual obvious peanuts in it. Not just something prepared with or near peanuts, but PEANUTS sitting there IN it, not even trying to be sneaky. Anyway, he had a bad reaction, had to go to the hospital, etc. He was fine, but it was a major scene and we had to discuss awareness of nut allergies and food preparation for students. It was hard to be very sympathetic, though, because maybe the kid, who KNEW he was allergic to peanuts, should have NOT EATEN PEANUTS.
So anyway, if you want to jump on the latest cutting-edge teen fiction trend, write something dramatic yet sensitive about the very real threat of NUT ALLERGIES. If you're REALLY ambitious, write a DYSTOPIAN teen novel about a future in which some murky government controls the populace by GIVING them peanut allergies through genetic engineering, and then controlling the food supply, thus being able to PUNISH those who disobey by slipping peanut oil into the food supply.
Wait-- that's my idea. I should write that.

For years now, I've had two little eraser hamsters sitting on the top of my circulation computer monitor. They usually have some sort of eraser food item between them. If I only have eraser ice cream or eraser cake for them, eventually kids worry that the hamsters aren't getting proper nutrition, and I have to switch it out for eraser fruits, or eraser vegetables. Sometimes a student or even a teacher friend buys the eraser hamsters some new eraser food/treats. I try to give them something new each week or two. The students notice and complain if the eraser food isn't changed out occasionally.
One time a clever student even made a little appropriately-sized bathtub for the hamsters, complete with tiny towel and tiny sponge, because apparently there was concern about their hygiene.
Somewhere along the way I received an eraser pumpkin, and started putting it out for the hamsters during October and November. Which meant that of course the kids insisted that something Christmas-themed needed to show up for the hamsters in December.
But I've kept an eye out, and have yet to find a tiny eraser Christmas tree, or a tiny eraser Christmas present, or stocking, or anything that would work. The last few years I've hand-crafted a tiny Christmas tree (you can see it HERE) out of green construction paper, with red hole-punched ornaments and even a prismatic silver star glued on top.
This year the kids started asking about the hamsters' Christmas tree, and I just haven't had time to hand-craft one. But the kids kept insisting those hamsters NEEDED something Christmasy. Then I remembered we had some little artificial snowy pine trees we had been using at home for a family miniature diorama craft. So I cut one to eraser hamster size, and brought that in. It has appeased the hamsters and their fans.

Posted by Tommy Kovac at 7:00 AM No comments:

SANTA VS THE KRAMPUS : the legend continues

A few years ago I did this illustration for the cover of the school newspaper's December issue: 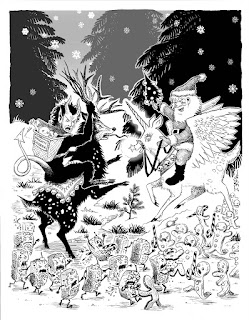 This year I used the same illustration for due date bookmarks, but I split it in two halves, so that students get either the Krampus, or Santa. 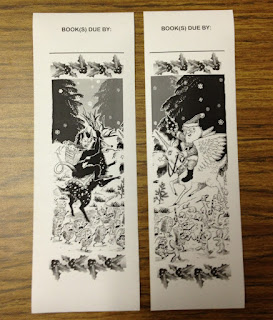 It's entirely random. If you're superstitious, you could choose to believe that getting the Krampus means you're BAD, and getting Santa means you're GOOD. I don't tell the kids that, because I wouldn't want the ones who get Krampus to feel bad. But if it were me, and I got the Krampus, I might think I was totally doomed.
The students are totally aware of the Krampus because of this bulletin board display I have up, which I also did the artwork for several years ago. I do like me some Krampus. 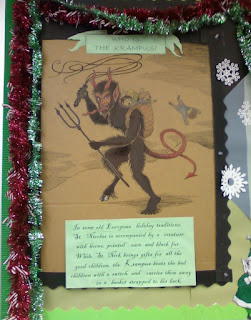 I was pleased to overhear two girls who were borrowing books teasing each other that if they let their books become overdue, the Krampus would get them. They were giggling and freaking each other out with the Krampus. I approve.
I've also had several kids asking for a matched set of the due date bookmarks, so they'd have both Santa and the Krampus. One kid even muttered, "Okay, good, now I can just cut off the edge and fit them together to make the complete picture..."
I think that's pretty cool. It's the little things in life...
(...that will judge you NAUGHTY, beat you with switches, stuff you in a basket and drag you down to HELL... Merry Christmas!)
Posted by Tommy Kovac at 4:30 PM 4 comments: 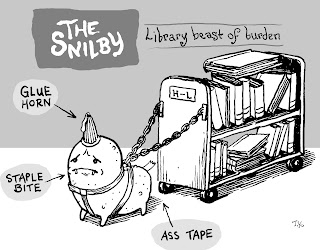 This is the Snilby, a character I created a few years ago for an animated series pitch called "Quiet, Please." The story takes place in a library in Hell, and the Snilby leads a grim life toiling for the shelving demons.
This is a new drawing, because I figured out some upgrades for the Snilby, such as the tape-dispenser butt, glue horn, and staple bite. I think he's even more efficient now, and every library should have one.
Posted by Tommy Kovac at 7:35 PM 3 comments:

RIYL DIARY OF A WIMPY KID

A few days ago a kid asked me for books "like" the Diary of a Wimpy Kid series by Jeff Kinney. I sighed, then set to work coming up with suggestions.
Basically I tried to find titles that fit a few or all of the following criteria:

Here's my list, which I'll be putting on an end-cap display:

Whales On Stilts! by M.T. Anderson

The Strange Case of Origami Yoda by Tom Angleberger

The Day My Butt Went Psycho by Andy Griffiths

Leon and the Champion Chip by Allen Kurzweil

In the Land of the Lawn Weenies by David Lubar

Middle School, the Worst Years of My Life by James Patterson, Christopher Tebbetts, and Laura Park

How To Eat Fried Worms by Thomas Rockwell

The Dork Diaries by Rachel Russell

Wayside School Gets a Little Stranger by Louis Sachar

BONUS:
Books by Roald Dahl, while not realistic, might be comedic & snarky enough to fit the bill.
Posted by Tommy Kovac at 12:05 PM No comments: