ONCE UPON A TIME ("The Two Caskets")

In a previous post (The Two Caskets: inspiration for Alice In Wonderland?) I wrote about an animated movie I remember from childhood about a girl falling down a well to a magical land.  I couldn't remember the name of it, and hadn't been able to find a story it was based on.  But then I ran across a fairy tale called "The Two Caskets" in an anthology, and knew it was one and the same.  The problem is I couldn't find any record of a movie called "The Two Caskets."
Finally, after trying every string of search keywords I could think of, I finally found it.  "Once Upon a Time," from 1976.  Then blog reader Muhammad Khalid wrote to let me know he also remembered the movie, and had discovered the name of it.  He went the extra mile and also included a link to where you can purchase it from Amazon. 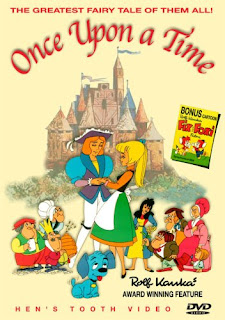 ﻿I rented it through Netflix, and it's been sitting there unwatched.  I keep thinking about it, but I'm afraid I'll be disappointed, that it won't be anywhere near as magical as my childhood self found it.  I think it was just the idea of a girl falling down a magical well to another world that set my mind a-whirl.  But there is a blue dog in it, and that's definitely a plus.
I remembered Disney's "Snow White" being chock-full of magic, horror, and adorable talking animals, but when I watched it as an adult I was stunned to find it slow and draggy, way too much time spent with those grimy little dwarves dancing and singing and acting like drunken morons.  And Snow White, sitting there clapping delightedly, like a slow girl.
I had a similar disenchantment with the Smurfs.  I could go on a tirade about it, but that's for another day, and wouldn't do me or them any good.
Posted by Tommy Kovac at 3:52 PM

Email ThisBlogThis!Share to TwitterShare to FacebookShare to Pinterest
Labels: once upon a time, two caskets