I've been busy making some stuff, so here it is:
Via "Society6" and their awesome quality art prints, here are some designs I did with bulletin board display in mind. They can be printed at different sizes, and used as posters or small signs.

APPAREL
And also I designed a few T-Shirts that I think are ideal for showing Banned Books Week pride:

Hey there, anybody who's interested! This blog will continue from this point on my website, right HERE.
Posted by Tommy Kovac at 5:06 PM No comments:

"Oh, go roast a marshmallow, Clelland."
(out of context quote)


All he ever wanted to be was a librarian, but suddenly, through a series of unexpected events, Lance is forced to serve as deputy to the town of Wild Card. A dangerous prisoner escapes, and Lance is determined to "bring him back alive," using his wits instead of weapons. Eccentric Aunt Charlotte and Jamie, the town blacksmith, add to the color and action of the story.
(from the back cover) 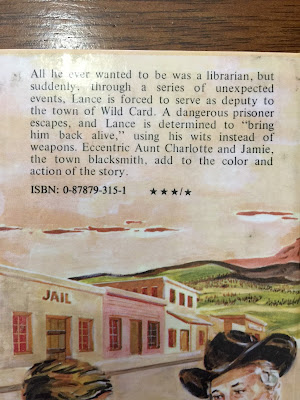 According to the title page, this is a "PERSPECTIVES BOOK," published by Academic Therapy Publications in Novato, California. So... that sounds... fun?

I think there should be a band named "Aunt Charlotte's Trick," and their first album could be called, "Tricked, Trapped, and Wised-Up."

Posted by Tommy Kovac at 2:25 PM No comments:

NO GOOD DEED... (this library needs an enema)

In the middle of the lunchtime rush today, one of the students said, “Mr. Kovac, I want to get you an enema as an end of the school-year gift.”
I was like, “Whaaaaat???”
The student seemed perplexed at my response, and said, “It’s a little figurine, called The Protector of Books. You know, an enema.”
I could barely control myself, snorting and doubled-over. “Um… I don’t think you mean ‘enema.’ That’s something else, entirely!”
“Crap. Oh my god. Well, it’s a word that sounds kind of like enema.”
I told him he needed to go look up the word “enema.”
Now thoroughly embarrassed, but not sure why, he said, “Don’t tell anybody I said that! I don’t know what it means, but don’t tell anybody!”
I was still laughing pretty hard, like a Mean Girl, and taunting him. “I’m going to tell EVERYBODY.”
“No, just forget I said that!”
I began to finally take pity on him, and said, “Thank you, though, that sounds awesome. I like that, ‘Protector of Books.’ But really, you need to look up the word ‘enema,’ it’s pretty funny…”
“No! I don’t want to know what I said!”
*
So, to sum up this little episode: A student told me he was thinking of buying me a very thoughtful gift for the end of the school year, and I mocked him mercilessly. I will work on being less of a dick.
*
Posted by Tommy Kovac at 12:20 PM No comments:

So, we have a district meeting today for all library staff. There are about 18 of us, 19 counting the District Librarian. We try to get together for lunch before our afternoon meetings, because that’s nice, or whatever. Last time it was Ruby’s, and everyone was fine with that.
This time, however, things are not so simple. Oh, no, my friend.
I will convey the gist of things below. And believe it or not, this is almost verbatim.

LIBRARY TECH 1 (via email to group): Hey, are we doing lunch together before the meeting?

LIBRARY TECH 2: Sure! Where should we meet?

LIBRARY TECH 3: Tommy, how about that Mexican place you usually go to? Or how about this Country Café Place? (includes link)

LIBRARY TECH 4: I don’t like that place, it’s not very good.

LIBRARY TECH 3: I think there’s a Spires nearby…

TOMMY: Yes, there is a Spires right across from where our meeting is being held. I vote Spires.

LIBRARY TECH 4: Yes, but there’s also a Chipotle, and plenty of other eateries in that same area.

LIBRARY TECH 5 (privately to just Tommy): That’s where Library Tech 6 and I usually go before meetings! (Presumably referring to Spires)

TOMMY (privately to Library Tech 5): Great! Let’s go there, then. Should we make reservations?

LIBRARY TECH 5: Well, let’s find out where everyone else is going, first. Library Tech 6 and I haven’t figured out where we’re going, yet.

LIBRARY TECH 1 (to entire group): I’m totally down for Spires!

TOMMY (to group): Okay, how many of you are good with Spires, other than me and Library Tech 1?

LIBRARY TECH 7: I have errands to run first, but I’ll be there.

LIBRARY TECH 4: I’ll be there.

LIBRARY TECH 8: Have you eaten at the Sandwich Place across the street from Spires? It’s really good! We might want to try that.

LIBRARY TECH 9: I vote for Chipotle, because it’s better and healthier. Library Tech 4 is going there, too.

LIBRARY TECH 4: Well, actually it doesn’t matter to me! Either place is fine.

TOMMY (after discovering no cell coverage anywhere in library, and wandering out to quad in the sun, holding phone at various angles and directions until weak signal finally appears): Who is this?

TOMMY (hot, frustrated, getting crabby): Oh! My cell is fucked up, not showing me who’s texting. Already told Library Tech 1 and Library Tech 7 I’d go to Spires with them. ALL THESE BITCHES NEED TO MAKE UP THEIR DAMN MINDS!

-Tommy has to get some work done, and goes to counseling office to scan some documents. While there in the copy room, he mentions the frustration of the library techs not being able to figure out where to meet for lunch.

OFFICE ASSISTANT: Oh! You should go to this really great place on Euclid—

TOMMY: No way, I don’t even want to CONSIDER adding another option at this point! That’s the last thing we need!

OFFICE ASSISTANT 1: --and Broadway, it’s a gourmet hamburger place, the chef is amazing, and—

TOMMY: Thanks, but no.

OFFICE ASSISTANT 2: Oh, yeah, Fancy Burger! It was good, but they were, like, $15 burgers!

TOMMY: Hm. I HAVE been wanting to try that Fancy Burger place! No, wait! That’s not helping! I’m not suggesting another place!

-Tommy runs back to his office.

TOMMY (via email to Library Tech 1, Library Tech 4, and Library Tech 7): So, apparently lunch is a big issue and requires much heated debate. Are you guys switching to Camp Chipotle, or staying with Camp Spires?

LIBRARY TECH 1: Well, I’m not really in the mood for disease with my rice and beans. Remember that contamination issue with Chipotle? But this is a community thing, so I don’t know. Where are you going?

TOMMY: I don’t know. My brain is dead and I am now incapable of making a decision. I say we let Library Tech 4 or Library Tech 7 decide.

LIBRARY TECH 4: Who knew lunch would divide us? I’ll go to Chipotle. But there is a Northgate Market there, too, and they have a HUGE food court!

Just did this illustration for a bookmark with a list of fantasy books on the reverse side. :)
You can see the list HERE.

Posted by Tommy Kovac at 6:52 PM No comments:

Did you know you can buy a t-shirt with my version of the Cheshire Cat from Alice's Adventures In Wonderland on it? Only with Library Dewey Decimal Number 636.8 on the hat? Well, you CAN! It's amazing, right? Click the image below to see the product page on Amazon. It's available in sizes for Men, Women, and Youth, just lick on which one you want. (I mean "click.") Also color options.
Shirts run a little small, so order a size or two larger than you think you'll need.

Posted by Tommy Kovac at 9:20 AM No comments: