When it comes to bulletin boards and displays, there's too damn much going on in February, and the color schemes are not complementary.  There's Valentine's Day (which is lame in real life, yet easy and fun to make displays for), Presidents' Day (February 21st), Chinese New Year (February 3rd), and it's also Black History Month.  Chinese New Year and Valentine's Day share the color RED as a common scheme, but the rest of all that crap ends up being an uneasy smear of browns and oranges if you're not careful.
George and Abraham certainly were not fashionistas.  But I've done what I can.
Don't ask me why David Sedaris is thrown in with the rest of these things.  I think one of our Library assistants suggested it, using the logic that Sedaris has that new book about squirrels and chipmunks, and Squirrel Day was on January 21st.  But then I just left him up there and stuck him with the bunnies for Year of the Rabbit.  I don't think he'd mind.
Behind the circ desk I created a little nod to Valentine's Day, complete with a romance genre poster.  Whatever.  That's one of those genres I cannot, nor will I ever, be able to tolerate. 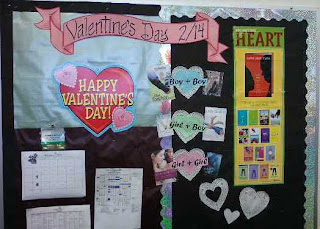 Having had a very recent conversation with a student about gay issues, in particular how tough dating/romance can be for gay teens, I thought it would be nice to make sure the Library was INCLUSIVE in its representation of Valentine's Day.  I spotlighted 2 books from our collection for each orientation:
BOY + BOY:
The God Box by Alex Sanchez
Icarus In Flight by Hayden Thorne

GIRL + BOY:
I Heart You, You Haunt Me by Lisa Schroeder
Forever by Judy Blume

GIRL + GIRL:
Annie On My Mind by Nancy Garden
Keeping You a Secret by Julie Anne Peters

Many of the kids have definitely noticed the display, especially the "Boy + boy" part.  Most reactions have been very positive, but the first day I put the display up one of the boys made a point to recoil and act freaked out, saying, "Boy plus boy?  Girl plus girl?  Wow, that's WEIRD..."
I said, "What's 'weird' about it?" and looked him right in the eye, waiting to see what he'd say.  Another student standing nearby piped up, "Yeah, what's WEIRD about it?" which I thought was cool.  The boy stammered, "Nothing!  Nothing's weird about it.  Nevermind..."
I thought to myself, That's right, bitch.

We needed to update our "Coming Soon" board, and like usual, even BEFORE I was done lettering everything the kids were eagerly asking about the titles.  The last Alex Rider (Anthony Horowitz) book is coming out in March, and I think 9 books in a series is quite enough.  Ranger's Apprentice (John Flanagan) is finishing with book #10 in April, and I think that's TOO many books.  But that whole series is wildly, relentlessly popular in our library.
I don't think I could make it through a 10-book series now.  I've read some fantasy/sci-fi series as an adult that stretched to 5 books, and that seems like an accomplishment.  But these are smaller, teen-level books, so I guess it's different.  When I was still in elementary school I'd read all the Narnia books, all the Prydain Chronicles, and all 14 original Oz books by L. Frank Baum.
So anyway, there's February.  The end.
Posted by Tommy Kovac at 12:55 PM

Email ThisBlogThis!Share to TwitterShare to FacebookShare to Pinterest
Labels: Bulletin board, bulletin board display